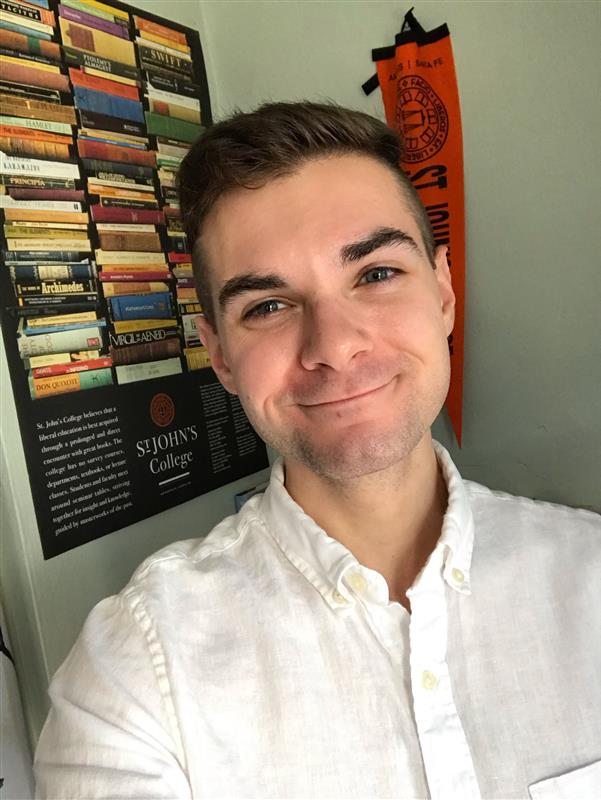 When reflecting on the year I worked with Admissions Counselor, Drew Goodwin, I vividly recall our conversations by the fireplace moving fluently from topics on the books that were found at the local thrift store to the tea that one of us had discovered. And, when another student-aid walked in, Drew would converse with them with the same degree of passion, eloquently mentioning topics that were central to them. These lush interactions were, however, not solely reserved for us student-aides. Before concluding their tours, prospective students would often stop by the reception desk to remark on the radiant light that was insentiently transposed onto them from Drew.

As with most things right now, the college application process works differently; and I hope that this short interview with Drew remedies the lack of personal interaction you may wish to have with him. If you have any questions or want to contact Drew, please do so at: drew.goodwin@sjc.edu

Rediet: As a non-Johnny, how do you view and interact with the St. John’s environment?­­­

Drew: I am always surprised at the courage, and determination Johnnies have towards combating challenging circumstances. For instance, first-year Johnnies that are in my study group must have thought to themselves prior to signing up, ‘you know what, I want to be in this full-blown hyper academic space.’

I think SJC is a unique space for that, because even institutions that are smaller in size or similar in a lot of ways to St. John’s, do not have that ‘pure nerd kind of focus’. Where your life’s mission at that moment is to nerd out as much as possible without feeling weird for sharing your niche in random things, and if people do not share your interests, at least they will like to hear what you have to say.

You have noted that our ability, as Johnnies, to run after challenging moments is a distinguishing characteristic. Given the challenges that have been posed on society in the recent months, how would you say that you have faced challenges?

The summer was difficult because I did not interact—as much as I would have like to—with current students, or even my incoming students because everyone was occupied with other tasks. But in the recent weeks, I have been interviewing students and meeting them virtually through high school visits, and it is these interactions that have pumped the gas back into my engine…or to be a little more contemporary—put the electricity back into my battery.

By talking to students, you get to know their interests. I interviewed a student the other day who said, ‘I want to be a historian or an archaeologist.’ Another student remarked that their ‘dream job is to be C.S. Lewis.’ And though I do not know what that is, I thought, ‘I love that this is where your mind is.’

Your conversations with the prospective students made me wonder what your college application process was like. I know it must have been a while back, but what drew you to the school that you ended up going to; and knowing the things you know now, what would you have done differently?

Years later, I can look back and say, ‘Even though I got a similar kind of education, because it’s a liberal arts college, I didn’t get the full experience.’ Neither of my parents went to college, and my older brother had approached the application process in another manner, so my college application process was different. My older brother knew where he wanted to go and what he wanted to do, so naturally my parents did not have to navigate him through the process, but for me: I had no idea what I wanted, where I wanted to go, so we visited many schools. There were many big schools that we thought would be great fits, but I knew I would be uncomfortable there, so I ended up choosing my undergraduate institution.

Not because of the academics necessarily… Yes, they offered the major I was interested in, but at the end it was because I had finally found a place where I felt comfortable. I knew I could be myself there.

Opposite to the ostentatious and outgoing person I am today, when I was eighteen, I was shy and did not like to talk to new people.

There are a lot of things I appreciate about my undergraduate education, but I left it without having attained a clear picture of what I wanted to do—which I now understand as not being a bad thing; but I also left it with a very limited view of what I am capable of.

It is this that I am envious of in Johnny alumni and Johnnies in general: Their question is not, ‘what can I do?’, but rather, ‘what can’t I do?’. They will think to themselves and say, ‘Well, law school seems fine, but I can also go to medical school; or I could just go to UChicago and get my PhD in political science.’ When I hear this, I say to myself, ‘I did not think that I could get into law school, and certainly not Med school! I could have maybe done that PhD at UChicago’. Johnnies have an endless feeling that they are capable of understanding anything ‘cause they have been asked to do that over four years. They study the points of physics in order to understand the intricacies of calculus, which in turn is essential to them recognizing the beauty of moral philosophy and language.

Despite working at St. John’s, I still envy the capability and capacity that students at St. John’s graduate with.

You mentioned earlier that you are part of a study group. Do you find that when reading and taking part in the group, this mindset which you have identified as being innate in Johnnies, is available to you too? Prospective students often pose the question, ‘is there a certain type of Johnny, and how do I think like them?’ Do you think that Johnnies share similar characteristics that enhances their approach, or is it the books that evoke that kind of thinking?

It is the books that are responsible for this. You are asked to consume difficult ideas and intimately talk about them. So, when you are trying to understand these complex ideas, you work together to figure it out. I have found that many times I come in (to the study group) thinking I have no idea what this sentence meant, and someone says something tangentially related to the passage I was thinking about, and in that moment, something clicks.

Working together to unmask difficult concepts inspires a wondrous feeling. But, as much as the books teach the students, the discussions are equally important in shaping you. Johnnies live in the nuances and live into the uncertainty, which I think a few people do. As people we tend to think of everything as black, or as white, with there being nothing in the middle. In reality everything is nuanced, and you cannot say one thing is and always will be.

You share that vulnerability. Knowing that the traditional educational system was not going to serve you, you took the risk to do something different without knowing exactly where it was going to take you. Though you did not attend SJC for your undergrad, you have done that through your career. You are a Johnny, and I commend you for that.

I take that as a massive compliment. I have had high school counselors say, ‘No, you have to be a Johnny. You are too much like a Johnny… Well, at least you are in the right place.’ And I think to myself, ‘I definitely am. ‘