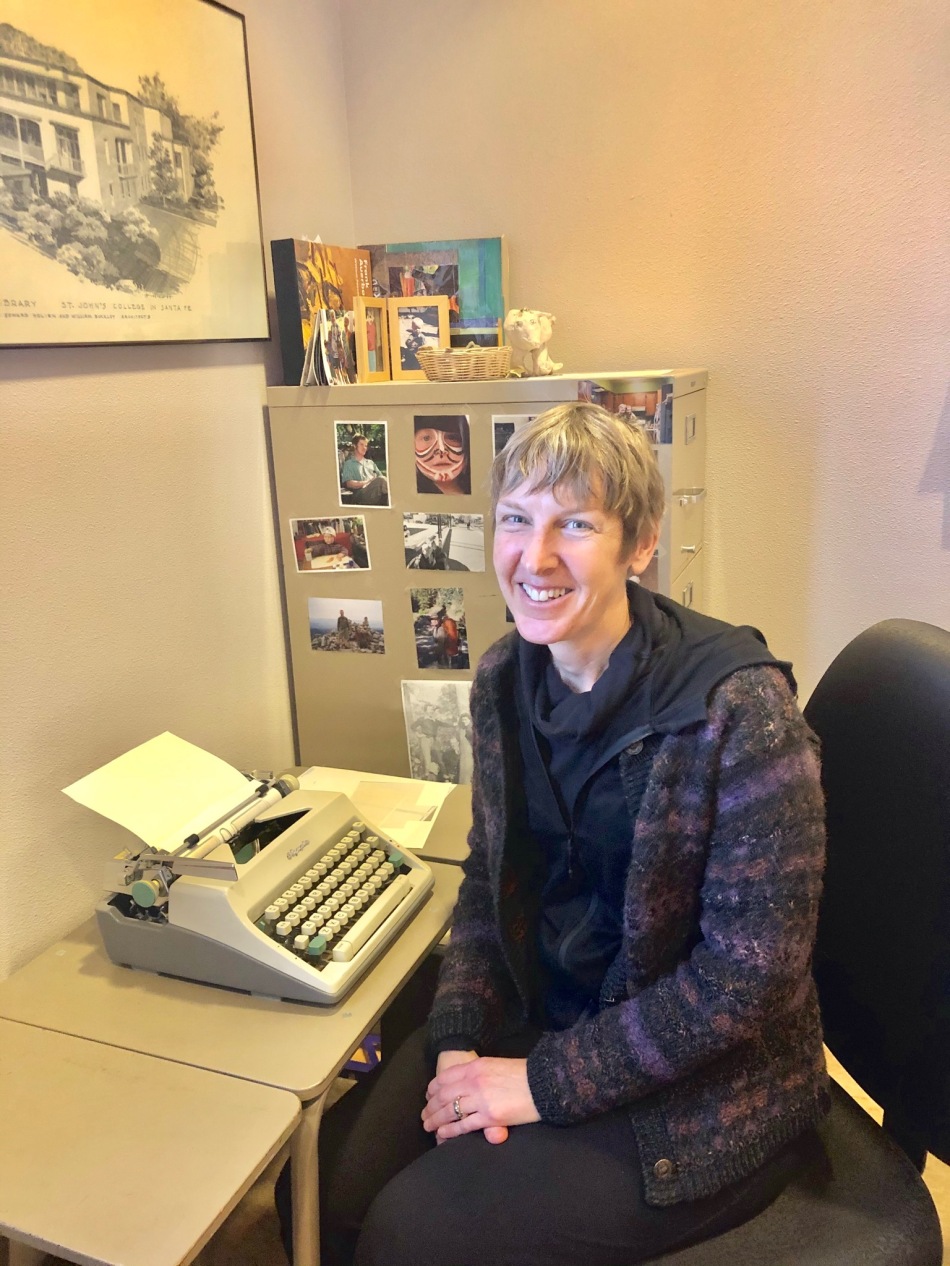 For this month’s spotlight, I was inspired by my precept on James Baldwin, where he stresses that it is by taking the time to listen to the story of all individuals that helps to preserve the  human connection that is often ceasing. With our common love for the great books, I thought it would be interesting to interview Laura Cooley, one of our Meem Library librarians.

Hello, Mrs. Cooley, tell me about where you grew up?

I grew up in the West River, Maryland which is two rivers South from the river that the Annapolis campus is on.

It was interesting, we were near the water. We actually moved there when I was in 4th grade because there was a creek in our backyard and my father had bought a sailboat the year I was born and he wanted to be closer to the boat. He moved us from College Park Maryland where he used to bike to work, to West River, where he had to commute an hour each way, so that he could keep the boat close by. It was very rural but I was fortunate to have some good friends.

Did you stay in West River or did you move around?

No, I only moved once.

During high school, junior year, I took an AP English class that visited SJC once a year to do a seminar and tutorial; my sister and a friend of mine had done it. I think it was when my sister told me about her experience that I started to really think about St. Johns, by the time I was a senior and visited, I had already been accepted. I thought about going to Hampshire College which is extremely different from St. Johns. I went to visit Hampshire and the Annapolis campus. The visit in Annapolis determined it for me!

What do you remember most about your visit?

The two things I vividly remember, was a sophomore music class, they were studying the music notation geometrically and everyone was drawing and running around and were so excited and enthusiastic. I was just thrilled, I had never seen people that on fire about anything in my public school.  And then I remember this guy, he was bald and had a big leather jacket on, and he was talking about how God was such a bully and I thought that was great!

I talked to a lot of people and was laughing more than I ever had.

Did you attend the Annapolis or Santa Fe campus?

I went to Annapolis my freshman year because it was closer, and then half of my class transferred my sophomore year to Santa Fe. There are only a few of us that took a year off and returned to Santa Fe for two years. I went to get my library science degree at the University of Michigan, and worked at the Colorado College library for a year. I had worked at the SJC library during the summer of my junior and senior year. The library director who knew me pretty well called me to tell me to apply for a position that had just opened up! I came back quickly as a staff member, while doing the Eastern Classics Program which I did part time over three years.

You mentioned that you took a gap year, what was that like?

Well, I thought I wasn’t coming back. I had been enabled but I felt like I needed to do something else. I thought I needed to try and live in a city by myself so I went to San Francisco! While I was living there I applied and got into Evergreen to do landscape architecture, I liked working in plant nurseries. After I had gotten accepted, I started reading the dialogues and looked at the Greek again and I called the registrar’s office and told them I needed to start all over again!

It was just as hard when I came back, it was the hardest thing I ever did. I read everything twice and did everything to try and understand what I was reading and sometimes I didn’t get a lot of it, but I stayed and there is a sense of completion. Things come back to me now that I know and would like to reread. I haven’t picked up those books yet, I’m still reading other things. Even though it was difficult for me, I knew it was important and that I needed to stay. At St. John’s, I was completely out of my comfort zone and I knew that I was learning and growing, but up to that point it had been so different. At public school, I knew how to be a good student and how to play that game but I couldn’t fake it here. It wasn’t just about working harder, I think I’m a highly intuitive person and not a logical person which often made conversation difficult. One of my difficulties was how to talk about my ideas when I didn’t know how to prove them. Till this day, I fully believe this education is for everyone, and we all have different ways of learning. I am still trying to figure out what my learning is.

How was it being a student here versus being part of the staff?

I used to work at the circulation desk and had many fruitful conversations with the students. I couldn’t remember the texts, so I would pretend never to have read it and work on it from there with them and I loved those conversations! I love what’s happening here, I completely believe in this pursuit of clarity about what it means to be a human being, and a human being in the company of others. When I started at SJC, I had a sense that I wanted to understand the foundations of our society and culture and [now] I think it’s a lot broader than that. When I think back on my education, it really is just about learning how to be a human being, and not just about our being in a specific society. I am still on that search, and I hope to be on that search for the rest of my life.

Special thanks to  Mrs. Cooley for sitting down with me to talk about her story.