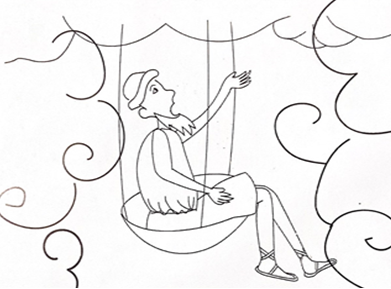 When scanning a St. John’s pamphlet, most people see a lot of math, a lot of science, and a whole lot of philosophy. But what about the arts? Never fear! Chrysostomos is here! Santa Fe campus’s assorted crew of theatre enthusiasts is back at it again this fall with their production of Aristophanes’ Clouds. Far from the high-stakes, tragic environment usually associated with the Greek plays, Clouds entertains itself with audience participation, a rubber “duchess,” poking fun at tutors, and two hours of fallacious arguments.

Those who viewed the production (sometimes more than once) saw it as an amazing experience and for the freshmen, who have recently started their nose-dive into the Platonic dialogues, the play brought on a whole new level of superb, silly, sarcastic Socratic sallies suited sublimely for seemingly sophisticated, silently seated students surrounding the stage. “I thought it was very good, absolutely hilarious, and a blast,“ says current freshman, Joanna.

Chrysostomos plans to venture into the greatly renowned, albeit feared within the theatre universe, Macbeth later in the semester with first performances hopefully occurring the weekend of December 13th. Thank you so much for the actors, technicians, director, and everyone in between for such a wonderful kick-off to the 2019-20 theatrical year!

0 comments on “Two’s Company, but Three’s a Cloud”