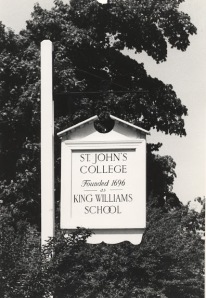 When it comes to expressing raw, unabashed patriotism, sitting a stone’s throw from the United States Naval Academy means that St. John’s College is forever at something of a disadvantage. We may be able to claim that Francis Scott Key trod the floors of McDowell Hall, but the Mids have more than history—they have explosives. And they have been known to put on an impressive fireworks display, indeed.

Still, across the street, St. John’s practices a particular form of patriotism that, for those observant enough to notice it, is a humble and humbling thing.

Consider: St. John’s College grew up with the country—in a sense, it was in the throes of its quarter-life crisis by the time the Continental Congress commissioned an army. When General Lee surrendered at Appomattox, the school was middle-aged. When President Kennedy was shot, it was a comparative graybeard.

Granting that the school today is quite different, in form and content, from what it was through most of its history (it was for the largest part an all-male military school; it is, now, a rather peculiar form of freethinkers’ guild), the land and the buildings and the setting manifest the rootedness of the school—in Annapolis, where every brick seems soaked in colonial history, and in the larger United States.

That rootedness, the fact that the school has grown up with the nation, was not unfamiliar to the founders of the New Program. Scott Buchanan and Stringfellow Barr, as well as their liberal arts boosters at other places, were deeply concerned about the relationship between education and citizenship, between the state of man’s soul and the state of his state.

It is no coincidence that the education St. John’s offers is, in key respects, one that would not have been unfamiliar to the Founders. Jefferson, Adams, Madison—they knew Plutarch and Thucydides, Herodotus and Plato. And, of course, they knew them in the original, as we try to (some with greater success than others).

That is because the relationship that concerned the Program’s founders reaches back to Athens; at Athens it finds its first, and perhaps greatest, expression, in questions and conversations that, should you choose to come to St. John’s, will quickly become familiar to you. Plato’s Republic is all about this.

But even beyond the curriculum, St. John’s talks about itself in political terms: We are a “Polity,” we say. And more specifically: We are a “Republic.” From the swath of options—we could have been a monarchy, or an oligarchy, or even a kakistocracy—we select for ourselves a government that places a solemn responsibility for virtue and duty on every citizen; we select for ourselves a government that requires us to be free—to know what that requires, and to live it out. 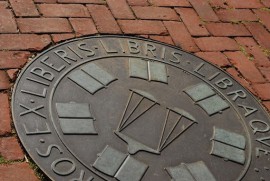 Facio liberos ex liberis libris libraque, the College’s motto reads: “I make free men out of children by means of books and a balance.” Spiritual, intellectual, and political freedom cannot be segregated. St. John’s does not seek to do so. It encourages an education that, in both mode and material, attains to the cultivation and integration of the whole person. In doing so, it recognizes that the best hope for a community—for a polity—is free human beings.

As colleges and universities incline toward vocational training and specialization, St. John’s seems to have adopted a vision that goes increasingly against the age. But this vision of free people—not just free electricians, engineers, and attorneys—however difficult to achieve, is a noble one. It should be an encouragement to us, perhaps today more than any day.

0 comments on “A Johnnie July 4th”