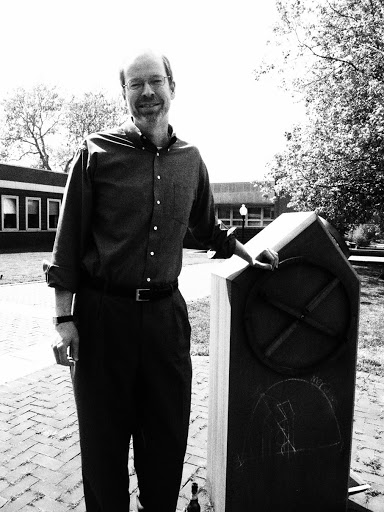 Mr. Ludwig has been teaching at SJC since 1997. From a small town in Evansville, Indiana he described his childhood as “idyllic.” The summers were long and boring, without the “temptation of Netflix, with its bounty of fairly good art.” He explained, “You were lucky if you had Little League. Otherwise we would bike around trying to get cigarettes out of vending machines that we were too young to use and reading the books off my parents shelf.” This is where his love of reading stems, and he recalls a period of his life which he deems “very self indulgent”, where he would repeatedly read Lord of the Rings while listening to records with appropriate sounding background music.

He attended Tennessee’s City University after moving to Tennessee in 9th grade. He heard about St. John’s program and proceeded to create his class schedule based upon the program. Taking greek and literature classes he ended up accidentally majoring in mathematics. He believes that this was a good route for him because he thinks the program would have been too difficult, as there is no upper bounds to the St. John’s homework, the readings for us students seem endless to him. He explained that back in undergraduate he “didn’t do the class readings until the exams were coming,” and the “lecture notes were taken to look at it afterwards because you couldn’t understand the material during class.” Very different than SJC.

He then attended University of Chicago’s Graduate program, Committee of Social Thought. Because it was a great books program he found himself best suited to be a tutor once he was on the job market. If he could say anything about St. John’s, without seeming to be “raving”, it would be that “It’s the best education you could possibly get, there is nothing else like it.” Take sophomore music for example, he explained how students come in as complete amateurs, not music majors, and by the end of the year are seamlessly analysing chord progressions while discussing the lyrics of pieces. We even sing everything we learn, “it’s just a beat of a different color.”

“Something students might not know about tutors,” Mr. Ludwig said, is that “quite often we do ask real questions we do not know the answer too, sometimes we do press for answers, but it’s probably worse for you (students.)” His real hope is that students continue the conversations outside of the classroom and focus on their friendships. He encourages us all to find someone whose favorite book is the same as ours. He believes we should remember to use sardonic humor to cut ourselves down when the books make us feel a little too self important.

Thank you for taking the time to talk to us about your experience as a tutor!